A cost that changes, in total dollar amount, with the change in the level of activity is called variable cost. A common example of variable cost is direct materials cost. Consider the following example to understand how variable cost behaves in a manufacturing company. 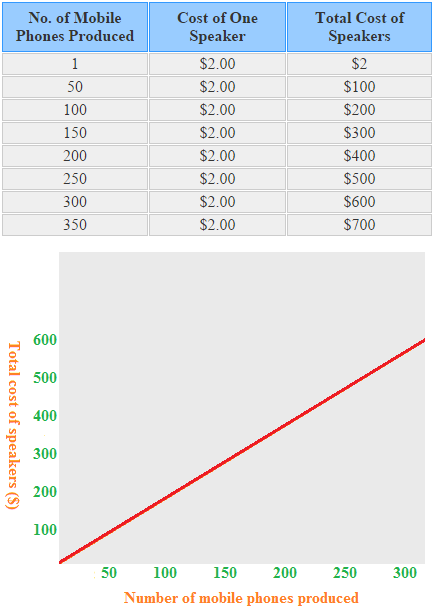 Notice that the total cost of speakers increases as the mobile phones produced are increased but per unit cost remains constant. Other examples of variable cost include lubricants, sales commission and shipping costs etc.

A cost that does not change, in total, with the change in activity is called fixed cost. A common example of fixed cost is rent. In above example, if mobile phone manufacturing company rents a building for its factory for $5,000 per month, it will have to pay $5,000 for every month even no mobile phone is produced during the month. The behavior of fixed cost is shown in the following figure:

Notice that average fixed cost (computed in the last column) decreases as the production of mobile phones increases. It is an interesting property of fixed cost.

Fixed costs can be further categorized as committed and discretionary fixed costs.

A cost that has the characteristics of both variable and fixed cost is called mixed or semi-variable cost. For example, the rental charges of a machine might include $500 per month plus $5 per hour of use. The $500 per month is a fixed cost and $5 per hour is a variable cost. Another example of mixed or semi-variable cost is electricity bill. The electricity bill can be divided into two parts – (1) a fixed line rent and (2) cost of units of electricity consumed. The line rent remains fixed and is not affected by the consumption of electricity whereas the cost of units consumed varies with the change in units consumed.

Three commonly used methods to divided a mixed or semi-variable cost into its fixed and variable components are high-low point method, scatter graph method and least squares regression method. All these methods have been explained and exemplified in next pages of this chapter.

More from Classifications of cost (explanations):
« Prev
Next »