Matching principle is an important concept of accrual accounting which states that the revenues and related expenses must be matched in the same period to which they relate. Additionally, the expenses must relate to the period in which they have been incurred and not to the period in which the payment for them is made. For example, a company consumes electricity for the whole month of January, but pays its electricity bill in February. So if the company has been operating under “cash based accounting”, they may have recorded the expense in the month of February, as it has actually paid cash in February. But under “accruals accounting” the entity is bound to record the electricity expense for the month of January and not February, because the expense has originally been incurred in January. 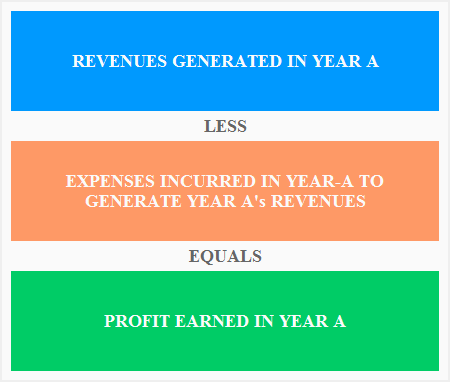 Matching principle is one of the most fundamental concepts in accrual accounting. In simple terms matching concept means, in relation to a given time period, the expenses that are recorded in the financial statements of a company must be related to the revenues generated in the exact same period. This treatment of revenues and expenses makes it sure that the whole effect of a transaction is reported in the same corresponding reporting period. Another aspect to consider is that, when both the revenues and the expenses must be recognized?

Revenues recognition: For a company, revenues must be recognized when the entity is sure that it has earned those revenues by fulfilling their part of agreement and that the other party will also fulfill its duty in terms of payment.

Expenses recognition: Expenses must be recognized when they are incurred and the revenue connected to them is recognized, irrespective of the outflow of cash or its equivalent.

Matching concept is a vital concept for companies for the sake of reporting their financial results correctly. Its main purpose is to avoid any possibility of misstatement of profits for a period. As matched expenses and revenues work under the basic equation of the “Income Statement”:

This is because a business cannot generate sales or revenues without incurring expenses like cost for raw materials, marketing expenses, selling expenses, administrative expenses or other sundry expanses etc. and so only reporting revenues for a given period without showing the expenses that were responsible to bring those revenues could alter the face of financial statements by either overstating or understating the profits of a company, thus resulting in wrong decision making by the end user of those statements.

« Prev
Next »
Show your love for us by sharing our contents.

2 Comments on Matching principle of accounting